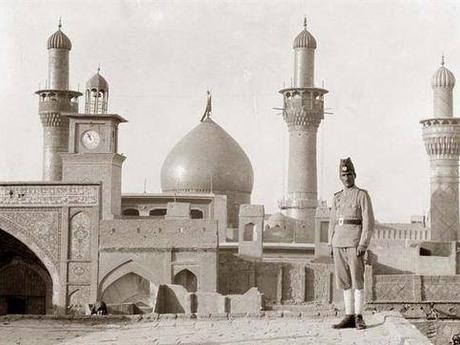 It is crucial to note that the Wahhabis—not unlike modern-day militants—were inspired by a mix of religious zeal and a desire for wealth. By 1802, the Wahhabi-Saudi state had seized control of the vast majority of the Arabian peninsula and even managed to raid into southern Iraq, then under Ottoman control. One of the worst massacres was committed at Karbala in April 1802, right before the beginning of the holy month of Muharram, during the pilgrimage to the shrine of Imam al-Husayn b. Ali (d. 680). The following are two accounts, one by an eyewitness, a non-Muslim Frenchmen, and the other by a Wahhabi propagandist writing in Arabia during the eighteenth century.

According to an eye-witnesses account, J.B. Rousseau in his Description du Pachalik du Baghdad Suivie d’une Notice Historique sur les Wahabis (Paris, 1809), the events that transpired were as follows:

“We have recently seen a horrible example of the Wahhabis’ cruel fanaticism in the terrible fate of the mosque of Imam Husayn. Incredible wealth was known to have accumulated in that town. The Persian shahs have, perhaps, never had something like that in their treasury. For centuries, the mosque of Imam Husayn was known to have received donations of silver, gold, jewels, a great amount of rarities…Tamerlane even spared that place. Everybody knew that the most part of the rich spoils that Nadir Shah had brought back from his Indian campaign had been transferred to the mosques of Imam Husayn and Imam Ali together with his own wealth. Now, the enormous wealth that has accumulated in the former has been exciting the Wahhabis’ avidity for some time. They have been continuously dreaming of looting that town [Karbala] and were so sure of success that their creditors fixed the debt payment to the happy day when their hopes would come true.

That day came at last…12,000 Wahhabis suddenly attacked the mosque of Imam Husayn; after seizing more spoils than they had ever seized after their greatest victories, they put everything to fire and sword…The elderly, women, and children—everybody died by the barbarians’ sword. Besides, it is said that whenever they saw a pregnant woman, they disemboweled her and left the fetus on the mother’s bleeding corpse. Their cruelty could not be satisfied, they did not cease their murders and blood flowed like water. As a result of the bloody catastrophe, more than 4000 people perished. The Wahhabis carried off their plunder on the backs of 4000 camels. After the plunder and murders they destroyed the Imam’s shrine and converted it into a trench of abomination and blood. They inflicted the greatest damage on the minarets and the domes, believing those structures were made of gold bricks.” [Rosseau, Description, pp. 74–75]

“In the year 1802, Ibn Sa’ud made for Karbala with his victorious army, famous pedigree horses, all the settled people and Bedouin of Najd, the people of Janub, Hijaz, Tihama and others…The Muslims [i.e. the Wahhabis] surrounded Karbala and took it by storm. They killed most of the people in the houses and the markets. They destroyed the dome above al-Husayn’s grave. They took away everything they saw in the shrine and near it, including the coverlet decorated with emeralds, sapphires and pearls which covered the grave. They took away everything they found in the town—possessions, arms, clothes, fabric, gold, silver, and precious books. One cannot even enumerate the spoils! They stayed there for just one morning and left after midday, taking away all the possessions. Nearly 2000 people were killed in Karbala.” (Ibn Bishr, Unwan al-Majd, Vol. 1, pp. 121–122)

Many of these details are corroborated by other contemporary sources, both Muslim and non-Muslim, which also emphasize how thousands of Muslims were slaughtered by the Wahhabis in Karbala. Most significantly, the sack of Karbala demonstrates the way in which the two motives of the Wahhabis—accumulation of wealth and destroying shrines—went hand in hand. The process of Wahhabi conquest elsewhere, notably in Ta’if and the Hijaz, had followed a similar pattern to Karbala. Although the Wahhabis were defeated shortly thereafter (around 1818) by the Ottomans and Muhammad Ali Pasha’s dynasty in Egypt, they experienced a resurgence later in the century.
​________________________

*Source: Blog of MohamadBallan (PhD student at the University of Chicago) ​

The Wahhabi Attack and Sack of Karbala 1802*

​Among the most atrocious acts committed in modern Islamic history has been the sack of Karbala in 1802. Unfortunately, this remains a little known fact to most Muslims. However, at a time when the cultural and religious heritage of the Muslim world is once against under severe threat, when shrines and mosques are bulldozed by the self-styled holy warriors and caliphs of our time, it remains more essential than ever to familiarize ourselves with these historical events.