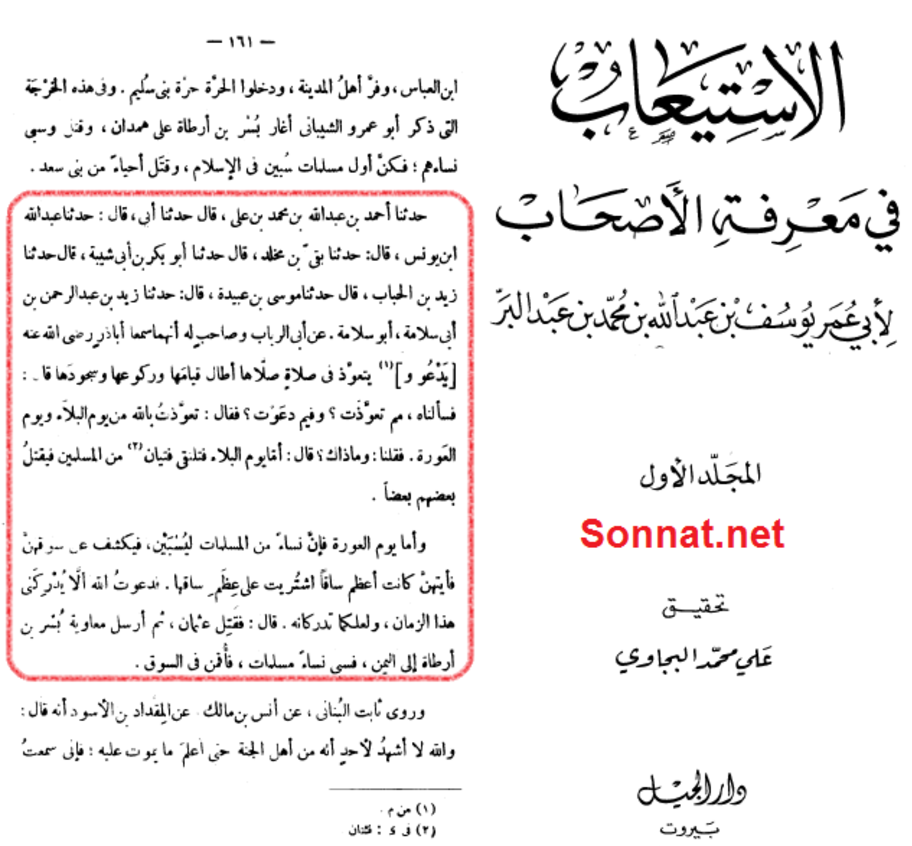 The above scanned page is from the Biography of Bisr bin Arta’a, given in the famous book Al‐Istee’ab, by the famous Sunni scholar in Ibn Abdul Barr. This page shows some of the atrocities committed by this criminal man. The main points of the attached page with some background information has been explained by Sayyid Abdul Husayn SharafuddeenAl‐Musawi in his book “Al Nass Wal Ijtihad” as follows:

“Once Mo’awiya had sent Bisr bin Arta’a to Yemen in the year forty A.H. to ravage there. The wali of Yemen at that time was Ubaydollah bin Abbas, who had been appointed by Imam Ali (s) who was the caliph of the Muslims then. The people of Yemen were loyal and sincere to Imam Ali (s). Bisr bin Arta’a subjected the people of Yemen to severe torment. He killed their men and captured their women by the order of Mo’awiya.

Refer to the books of history that have recorded the events of that year to see the horrible crimes that have committed by Bisr and his men; they have killed the old men, slain the sucklings, plundered the monies and captured the women.

Bisr had captured the women of Hamadan, who were sincere to Ahlul Bayt (s), and taken them to the market with naked legs. Whoever of them had had bigger legs (thighs) had been sold with high price. They were the first Muslim women that had been taken as captives in Islam.[2] “

A description of the following related scanned page, which is taken from a well-known Sunni source, is given bellow:​