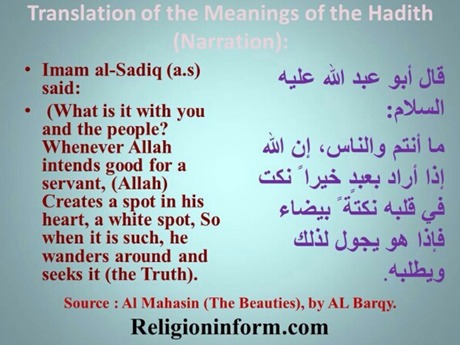 The Fast of Ashura*

Narrated: Abdullah Ibn Abbas: The Prophet came to Medina and saw the Jews fasting on the day of Ashura. He asked them about that. They replied, "This is a good day, the day on which Allah rescued Bani Israel from their enemy. So, Moses fasted this day." The Prophet said, "We have more claim over Moses than you." So, the Prophet fasted on that day and ordered (the Muslims) to fast (on that day).

Let us analyse and contemplate on whether this Hadith is Sahih or not. Let us bear in mind the words of Allah when He states:

“Do they not consider the Qur’ān? Had it been from other than Allāh they would surely have found therein much discrepancy.”

Having accepted this, the Hadith that we find quoted by those who are claimants to the followers of the Sunnah of the Prophet (pbuh and his family) contains many discrepancies in it that can be stated and we should not be afraid to state them:

Let us look ponder on this verse of the Qur’an:

“Has not the time arrived for the believers that their hearts in all humility should engage in the remembrance of Allāh and of the truth which has been revealed (to them) and that they should not become like those to whom was given the Book aforetime? But long ages passed over them and their hearts grew hard, for many among them are rebellious transgressors.”

Are we acquainted with those people who were given the Book foretime the coming of the Prophet (pbuh and his family)? Obviously they were the Jews and the Christians and what could it mean to not become like them? We could state that that Allah is teaching us that the Jews and the Christians changed the ways of their prophets or turned away from what their prophets taught them, rejecting what their prophets came with, we could even state that they fabricated or ascribed lies to their prophets by stating that they said or did such and such. We all know as Muslims that we are instructed not to resemble the ways of the Jews and the Christians to the extent that men were taught by the Prophet (pbuh and his family) not to keep their beards like the people of the previous scriptures. The question that needs to be asked is, how is it that Prophet (pbuh and his family) keeps with a tradition that the Jews followed when what he brought to the Muslims cancelled the way of fasting of the people of the previous scriptures?

Let us break it down:

1) The Prophet (pbuh and his family) came with a new Shariah.

The Qur’an teaches us that the Jews and Christians will not be happy until you follow their way:

“Never will the Jews or the Christians be satisfied with thee unless thou follow their form of religion. Say: "The guidance of Allah that is the (only) guidance." Wert thou to follow their desires after the knowledge which hath reached thee then wouldst thou find neither protector nor helper against Allah.”

2) Was it the Jews who taught the Prophet (pbuh and his family) matters in regards to the Shariah or Allah?

3) Prophet (pbuh and his family) taught us that even if Moses-Musa (AS) was alive today he would have to follow him i.e what he brought.

How is it that in this practice of the fast of Ashura the Prophet (pbuh and his family) follows Moses?

We need to contemplate; does a Prophet of God need explanation from the people of the previous scriptures, or his followers in regards to a practice, which was existent amongst them?

“And this is a Book which We have sent down, bringing blessings, and confirming (the revelations) which came before it.”

We cannot doubt that whatever was revealed pre-Muhammad was known by Muhammad.

[..Finally] Imams of Ahl al-Bayt have totally called them innovations portrays to us why Shiahs do not observe such a thing on the day of Ashura.

We really need to ponder on how such traditions have been brought into the fold of Islam, which also contradict the teachings of the Qur’an.

Sayyid Saeed Akhtar Rizvi stated (May God Bless his soul) in an article on the fast of Ashura (Al- Serat, A Journal of Islamic Studies):

“One feels constrained to mention here that this and other such traditions were forged by camp-followers of the Umayyads, after the martyrdom of Imam Husayn, as a part of their campaign to turn the 10th of Muharram into a day of rejoicing. These traditions are of the same genre as those which say that it was on the 10th of Muharram that Noah's ark rested on Mount Arafat, the fire became cool and safe for Abraham, and Jesus ascended to the heaven. In the same category came the traditions exhorting the Muslims to treat 'Ashura as a festival of joy, and to store one's food-grain on this very day as it would increase one's sustenance and bring the blessings of Allah to the household.”

May Allah guide us all, Ameen.

This section contains the following articles related to Shia/Sunni Debates: