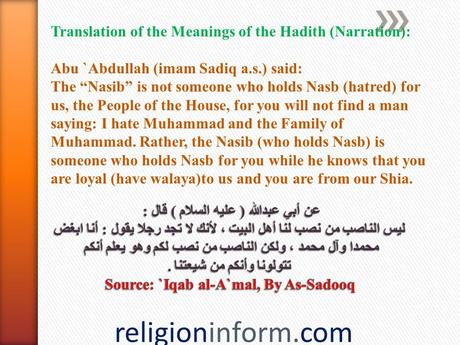 The Twelve Imams in the Old Testament *

Ibn Kathir says:
We see the following prophecy in the Taurat which is in the hands of the Jews and the Christians: "Indeed Allah, the Exalted, has given Ibrahim (a.s.) the glad tidings of Isma'il, and he has bestowed a favour and multiplied it and placed in his progeny twelve mighty (personalities)."
And he says:
Ibn Taymiyya said: "And these are the same, regarding whom the Prophet (s.a.w.s.) has given the glad tidings in the tradition of Jabir bin Samurah and stated their number; indeed this is with regard to the Imams and the Hour will not come till they last. And many of those who accepted Islam from among Jews think they are the same Imams of the Rafidi sect." [1]
The afore-mentioned glad tiding is present in the section of Genesis (17-18:20) of our era. It is also present in the original Hebrew.
The words (of the Lord) to Ibrahim (a.s.) translated from the Hebrew are as follows:
"And as for Isma'il, I have blessed him, and I have made him fruitful. And I have truly multiplied him, he will beget twelve leaders and I will provide for him a large nation." [2]
This also indicates that the blessings, fruits and multiplication is in the generation of Isma'il (a.s.). "Shanim Asaar" means "twelve"; and the word "Asaar" is used for a compound number when the counted things are masculine. The singular "Naasi" means: Leader, chief, head, etc. [3]
The Almighty Allah ordered Ibrahim (a.s.) to leave the city of Namrood and go towards Syria. So he left the city with his wife Sarah, and Lut (a.s) and migrated according to the Divine Order. In due course, they reached the land of Palestine.
By the Grace of Almighty Ibrahim (a.s.) was bestowed an excess of wealth. He said: "O my Lord what can I make by this wealth, and I do not even have a son?" The Almighty revealed to him, "I will increase your progeny till it reaches the number of stars." Hajra was the slave girl of Sarah. Sarah betrothed her to Ibrahim (a.s.). She bore for him a son, Isma'il (a.s.). The age of Ibrahim (a.s.) was 86 years when Isma'il (a.s.) was born to Hajra. [4]
The Holy Qur'an mentions in the following words the prayer of Ibrahim (a.s).
"O Our Lord! Surely I have settled a part of my offspring in a valley unproductive of fruit near Thy Sacred House, Our Lord! That they keep up prayer; therefore make the hearts of some people yearn towards them and provide them with fruits; haply they may be grateful." (Sura Ibrahim 14 : 37)
The holy verse points to the fact that Ibrahim (a.s.) had settled some of his progeny, that is Isma'il (a.s.) in the area of Mecca and he also prayed that the Almighty Allah may bestow them with His Mercy and that they remain the medium of guidance for humanity till the end of time. The Almighty accepted his invocation by appointing Muhammad (s.a.w.s.) from his progeny, and after him his twelve successors as the leaders of humanity for the time to come.
Imam Muhammad al-Baqir (a.s.) says: "We are the remnant of progeny. And that was the prayer of Ibrahim (a.s.) regarding us."
* Source: “The Twelve Successors of the Holy Prophet (p.b.u.h.h.p.)” by Sayyid Murtada al-'Askari. Ahlul Bayt Digital Islamic Library Project. Available From: http://www.al-islam.org/twelve/. [Accessed July 26, 2009]
________________________
Notes:
[1] Ibn Kathir, Ta'rikh, 6:249 and 250.
[2] Genesis 17.
[3] Al Mu'jam al-Hadith.
[4]Al-Ya'qubi, Tarikh , 1:24-25 (Printed at Qum). 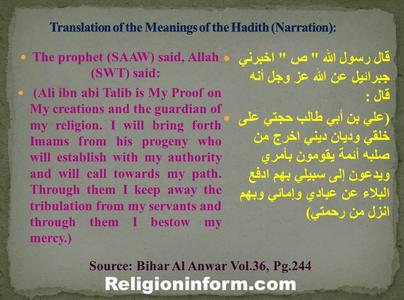 uccession of the caliphate after the Prophet… By written text (Dictate) or by election ? *

Any researcher in this subject, if he considers nothing but the truth, will find that the text in support of Ali is very clear, like the following saying by the Messenger of Allah: Whoever considers me his master, then Ali is his master. He said it at the end of the Farewell Pilgrimage, when it was confirmed that Ali would succeed, and many people congratulated him on that, including Abu Bakr and Umar who were among the well-wishers, and who were quoted as having said to the Imam:

"Well done, Ibn Abi Talib, overnight you have become a master of all the believers." [1]

This text has been agreed on by both Shiites and Sunnis, and in fact I have only referred in this study to some Sunni references. and not to all of them, for they are so many.

If the reader wants more information, he may read "al- Ghadir" by al-Amini (thirteen Volumes) in which the writer classifies the sayings of the Prophet according to the Sunnis.

As for the alleged popular election of Abu Bakr on "The Day of al-Saqifah" and his subsequent acclamation in the mosque; it seems that it was just an allegation without foundation. How could it be by popular agreement when so many people were absent during the acclamation? People like: Ali, al-Abbas, most of the house of Bani Hashim, Usama ibn Zayd, al-Zubayr, Salman al-Farisi, Abu Dharr al-Ghifari, al-Miqdad ibn al-Aswad, Ammar ibn Yasir, Hudhayfa ibn al-Yaman, Khuzayma ibn Thabit, Abu Burayd al-Aslami, al-Bura ibn Azib, Abu Ka'b, Sahl ibn Hanif, Saad ibn Ubada, Qays ibn Saad, Abu Ayyub al-Ansari, Jabir ibn Saad, Khalid ibn Saad, and many others. [2]

So where was that alleged popular agreement? The absence of Ali alone from the acclamation is sufficient to criticize that meeting because he was the only candidate for the caliphate, nominated by the Messenger of Allah, on the assumption that there was no direct text regarding such a nomination.

The acclamation of Abu Bakr was without consultation, in fact it took the people by surprise, especially when the men in charge of the Muslim affairs were busy preparing for the funeral of the Messenger of Allah. The citizens of al-Medinah were shocked by the death of their Prophet, and then they forced the acclamation [3] on the people. and even threatened to burn the house of Fatima if those who were absent from the acclamation refused to leave it. So how could we say that the acclamation was implemented through consultation and popular agreement?

Umar ibn al-Khattab himself testified that that acclamation was a mistake - may Allah protect the Muslims from its evil -, and that whoever repeated it should be killed, or he might have said that if someone called for a similar action there would he no acclamation for him or for those who acclaimed him. [4]

Imam Ali said about that acclamation: "By Allah, Ibn Abi Quhafa has got it! And he knows that my position [regarding the caliphate] is like that of the pole in relation to the millstone! The torrent flows from me, and the bird will never reach me!" [5]

This section contains the following articles in relation to Sunni Caliphate and Shiite Imamate: