"Al-Askari father of Al-Imam Al-Muntadhar (The Awaited One): Al-Hassan ibn Ali ibn Muhammad ibn Ali Al-Ridha ibn Musa ibn Ja'far Al-Sadiq ibn Muhammad ibn Ali Zain Al-Abideen ibn Al-Hussain ibn Ali ibn Abi Talib, may Allah (swt) be pleased with them, he is one of the Imams that Shi'a claim infallibility for. He is called Al-Hassan Al-Askari (a.s), because he used to reside in Samarra and he is the father of the Muntadhar of the Rafidha. He died in the day of Friday, or Wednesday two nights before the end of Rabi Al-Aw'wal, or Jumadi Al-Ulaa of the year 260 A.H. at the age of 28 and he was buried next to his father, and his mother was a bondsmaid (female servant).

As for his son Muhammad that the Rafidha call him Al-Hujjah (The Proof) Al-Khalaf, he was born in the year 258 A.H. or 256 A.H. He lived after his father two more years and died. He disappeared and it is not known how he died and they claim that he resides in the cellar all this time and that he is Sahib Al-Zaman (Master of the Time)."

Read the translation of the underlined lines of what their scholar Al-Safadi (D. 764 A.H) had to say, which is given bellow: 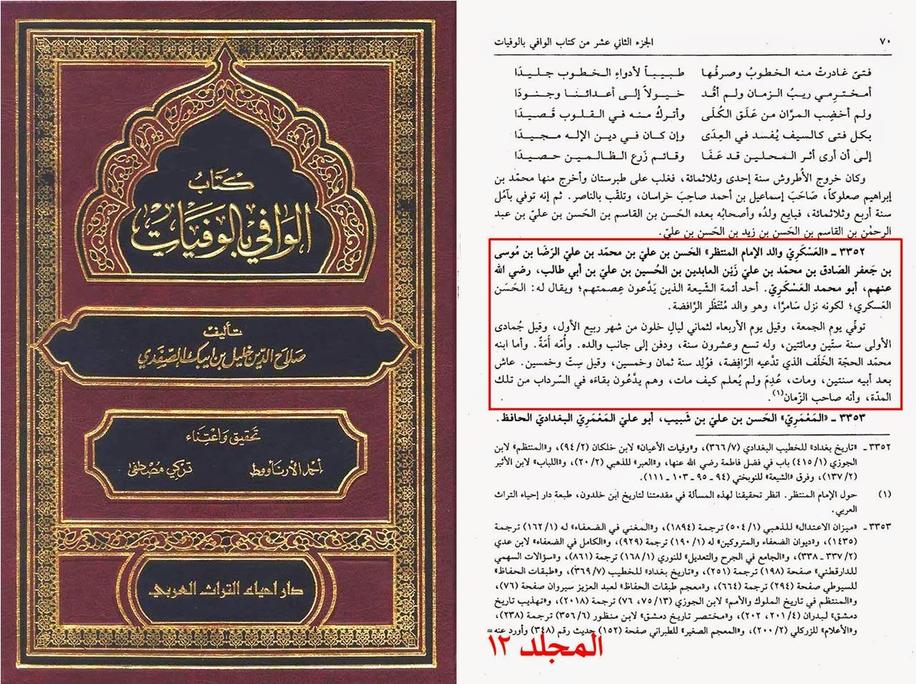 After they failed to deny the historic fact of the birth of our awaited Imam Al-Mahdi (AJTF), they claimed that he has died in childhood!!!